I’ve been working on this for time now and we’ve finally released the source code.  Usergrid is a comprehensive platform stack for mobile and rich client applications. The entire codebase is now available on GitHub at https://github.com/usergrid/stack.  There’s a full blog post up on the Usergrid Blog.

One thing that’s pretty interesting is that although this was initially envisioned as purely a cloud platform-as-a-service, a lot of the users I talked to were very interested in self-hosting.  So, we decided to adopt the WordPress model by making the source completely open and then following that with a cloud version.  One difference is that, unlike WordPress which kept the source for WordPress.com and WordPress.org separate, we’re releasing the entire multi-tenant architecture.  This means that if this takes off, that anyone can run their own private grid.  This is the sort of thing we used to debate at Six Apart, but we have the luxury of starting with a clean slate here.  It will be interesting to play the role of WordPress this time against the folks that are trying to offer similar functionality purely as closed source hosted-only options.

Key to making this possible was the development of a double-clickable app that fires up the complete stack, including an embedded Cassandra installation, right on your desktop.  This means that anyone can get started right away playing with Usergrid.  This is kind of an old-school approach, but then again, everything related to mobile is fundamentally about rethinking and in many ways turning back the clock on the relation between the client and the server.  For us, though, it means we don’t have to raise money to start getting developer traction.  And frankly, that’s a good thing.

Here’s a presentation that explains what Usergrid is all about: 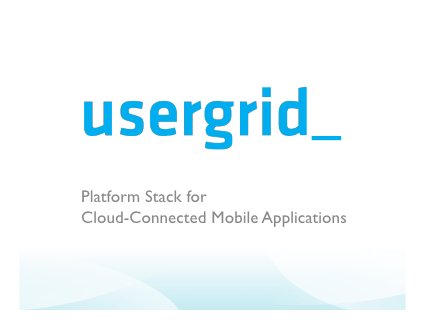 Over 20 years experience as an entrepreneur, creating innovative consumer and enterprise products and starting and selling several companies, and as an executive, defining product strategy at early stage and publicly traded companies.